Ranked: All the Season 9 episodes of My Little Pony: Friendship is Magic

Ranked: All the Season 9 episodes of My Little Pony: Friendship is Magic

Originally published on Flayrah: https://www.flayrah.com/7831/ranked-all ... ship-magic
-----
After nine years, My Little Pony: Friendship is Magic has finally drawn to a close. How did the final season stack up? Incredibly well! Nearly every episode was good, and personally I thought that half of them were excellent. What follows are brief reviews of each episode, ranked in order, from what I considered to be the weakest to the best. Spoilers will follow! 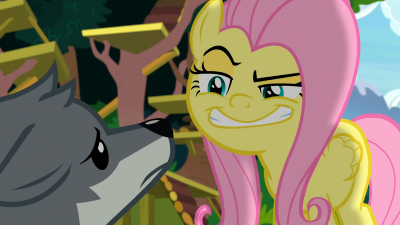 While the message of being yourself was good, it almost seemed to be against the very idea of fitting in. You don't have to sacrifice one for the other. There were several very good moments with Yona and Sandbar near the end that were genuinely touching, but the hint of romance came out of the blue, and there wasn't enough to outweigh the earlier cringe factor. Disappointing.

I'll admit that I was not happy with the way this episode destroyed long-standing fan canon. If it weren't for that, perhaps I would've ranked this higher, but I found many of the explanations unsatisfactory, and I didn't believe Scootaloo's parents really cared for her as much as was stated. Beyond that, it was incredibly jarring and confusing to hear such dramatically different accents from family members who should have grown up together.

A strongly average episode; there was nothing bad about it, but it also wasn't particularly funny. It was nice to see Cheese Sandwich once more, but I found the episode too subdued to really take advantage of having Weird Al again. It's impossible to watch it and not compare it with the first meeting of Pinkie Pie and Cheese, and this episode just doesn't come close to the excellence of Pinkie Pride.

A mixed bag. When Twilight was appointed as ruler to replace Celestia and Luna, it didn't make sense at that point. As the season unfolded, the decision felt less reckless but still artificial. The strongest aspect was undoubtedly the villains and the excellent dynamics between them. However, this was let down by attempting to pack too much into the episode, giving it a very rushed feel and preventing anything from feeling consequential. The ideas weren't all bad, but it would have benefited from unfolding over three episodes.

Pretty decent, particularly for a Spike episode. There isn't too much to comment on; overall it was okay and felt like something that was aimed more towards the younger portion of the audience.

Cute and inoffensive. There were some nice visuals and a couple of laughs, but it was just more of the same thing we've seen many times before, particularly in Castle Sweet Castle. 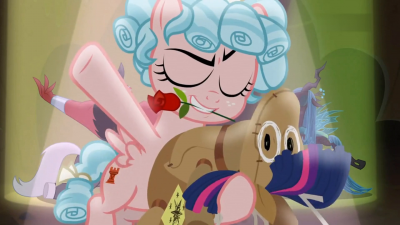 This had a nice lesson that really fits with Dash's personality and interests, but despite some nice moments, there's nothing that really elevates the episode.

Like many of the other mid-tier episodes, it makes a solid effort but doesn't really contain anything spectacular or memorable. It's nice to have a little mystery to try to solve, and the Great Seedling looked pretty cool in the legend. If anything, I feel that the episode did a good job of showing how religious beliefs can cause people to waste time chasing shadows.

This was quite a surprise as I thought we were done with the Cutie Mark Crusaders (CMC) after The Last Crusade. The episode is fun, and seeing the CMC grown up will probably please many fans. Despite how friendly and understanding Equestria can be, I'm surprised at how no one seemed to be upset that they wasted the last two wishes of a wishing flower. Such an item must be exceedingly rare, powerful and valuable.

A Spike episode that I really liked! It is a lot of fun to watch Rarity's reaction to not having Spike totally in her thrall, and it's far more healthy for him to focus on a pony (or gryphon, in this case) who's more suitable and reciprocates his feelings. Gabby and Spike also make a cute couple. I'd hoped that this would cure Spike of his crush once and for all, but I'm not entirely sure if that happened. Regardless, there was plenty to enjoy in this episode.

A lot of fun here, loved the inclusion of a wolf, and it was great to see Angel finally getting a voice. Despite all the jokes and excitement, I couldn't help feeling a bit uneasy with parts of it. Zecora's potion completely ignores bodily autonomy and actually puts Fluttershy's life in danger. And Angel even voices that "the stare" forces him to act against his will. There are other minor complaints, such as Spike's prize-winning charades abilities have apparently deserted him, and that this trope was already partially used in A Royal Problem, but it's still enjoyable all the way through.

What's not to love? We get trivia contests and a stressed-out Twilight with an adorable DJ Pon3 shirt! This episode is far from a one-trick pony, managing a strong emotional aspect as Twilight's obsession to win takes her to a really dark place. It all works out in the end to produce an extremely solid episode. 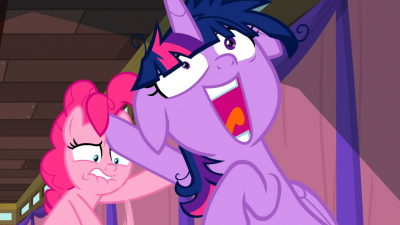 After the last Daring Do episode was a bit of a let down, I was pleasantly surprised by this one. I think it would have been even better if we had seen some duplicity on the part of Daring Do, but despite that, the conclusion is quite satisfying. Not every part of the episode makes sense but that's always been a problem with Daring Do. In the end, the episode is fun, the moral is good and it serves an important purpose in a world of filter bubbles and instant dismissal of opposing views.

This came out of nowhere and is interesting as a story developed by the voice actresses themselves. It really is just a chance to let loose and have some fun with a bunch of shenanigans. There were some really funny scenes and nice ideas, and I'm glad that they did eventually have some impact on the season's plot.

Random fun and hilarity brought on by a good, old-fashioned Twilight panic. While there isn't too much to say about it, I really enjoyed watching it.

It was really great to see Quibble back in the show. His previous episode was amazing and this one is very strong as well. The direction it took was quite unexpected, but I think it was an important episode which will resonate very strongly with certain members of the audience. That the episode actually reflects Patton Oswalt's (Quibble Pants) own life, and his real family does the voice acting for Quibble's family, really enhances the emotional strength of the episode.

7. Between Dark and Dawn

The part with Luna and Celestia was a lot of fun to watch; not only for the craziness but also to see their relationships as sisters. In contrast, I felt the Mane 6 part of the episode was unnecessary and had been done before. There's more than enough enjoyment here to make up for any minor failings. 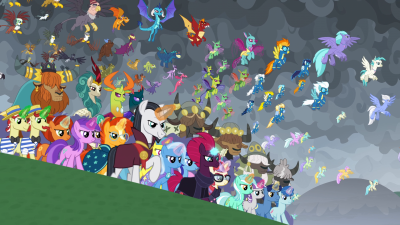 This felt like a reprise of Between Dark and Dawn. Once more we see the Mane 6 preparing for a big event, but this time they're prepared, and the episode took it to another level. Not only did we get our main characters at their best, and we saw our villains working together once more, which has been a treat all through the season. All that fun, drama and emotion, paired with some really incredible visuals makes this episode a notable high point.

Brilliant! It has both Starlight and Trixie, so obviously I'd love it, but it also has a great dilemma which is handled well. I think MLP reactor Luffyiscool made a very good observation that Starlight and Trixie episodes are particularly interesting because both of them share the blame. Each makes mistakes which they need to learn from, and this is something that a lot of people should be able to relate to.

This was a wild ride! From the first twist, right until the end it just never lets up. And despite packing in so much, it didn't feel as rushed as some previous episodes; the writers always managed to make it feel solid. It certainly wasn't without flaws, some of them quite major. A large plot point was how no one could control Discord's chaos magic, a point which is inconsistent with the season 4 ending that saw Tirek absorb and control Discord's magic with no problem whatsoever. I know I'm also not alone in feeling that turning the villains to stone was a poor end. It is an unbelievably cruel and evil punishment that hardly seems justifiable and I feel it undermines a lot of the show's positive messages, particularly because Frenemies showed that the villains were susceptible to friendship. There were also a lot of good points. I absolutely loved the reference to Fallout: Equestria and there were so many treats for fans. While predictable, the ending with everyone coming together was really well-done and brought everything to a climax. It wasn't perfectly structured, but it was a worthy, final two-parter.

Starlight and Trixie! As I mentioned with a A Horse Shoe In, these episodes are far more grey than the usual moral conflicts of the show, and so a lot more mature and interesting to watch. This was a great one on work-life balance and responsibility, with a lot of great action and some brilliant lines. Maud was killing it throughout the episode but every character pulled their weight and made this incredibly enjoyable.

Absolutely amazing! No Mane 6 or any of the "good" ponies, just the villains. The interactions between the characters were brilliant. The episode was extremely funny. It set things up for the rest of the season perfectly. It featured a great song. All around, this was an absolutely stand-out episode.

This final episode isn't filled with crazy antics, although it does drop some great fan service. The pace is slow and the tone subdued but it's filled with emotion. This is both the end of Friendship is Magic and of Twilight's time in Ponyville. We can see her both in the future, looking back at how things used to be and all she learned as well as in the past, scared about what changes the future will bring. Twilight's journey mirrors that of the viewers as we have to face that a show we loved will no longer be there and that the way things were is going to change. At the same time we can look back at all the friendships, fun and memories that were formed because of this show. Before the series ends, with the closing of the book that first opened the entire show, we are treated to one last, beautiful song and a final opportunity to reflect back on the many characters we got to meet along this journey.

This last episode is a perfect goodbye and one which has caused me to shed a tear each time I've rewatched it. I would like to extend my thanks to everyone who was involved in the show for all the joy they have brought. Although the show may be over, I hope that it, and the bronies who loved it, will continue to spread the magic of friendship through kindness, honesty, loyalty, generosity and laughter. 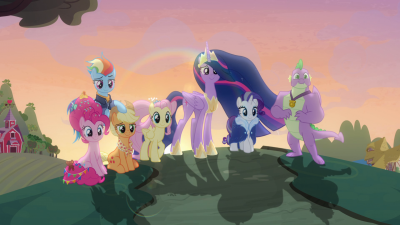 Return to “Movies and TV”