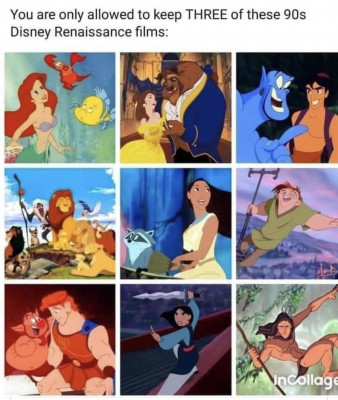 
This is tough! There are some great films there.
Lion King is an easy first pick.
Mulan will come second.
Then a toss-up between Tarzan and Aladdin but I'll probably go Tarzan.
But they all have some really strong selling points. 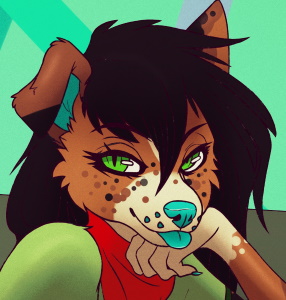 Tough, but I think I need to go with The Lion King, Beauty and the Beast and The Hunchback of Notre Dame.
Hunchback in particular I think could use more love. It feels maybe even more applicable and poignant today than it did when it was released, and features probably *the* most screwed-up Disney villain.
But yeah, a lot of great movies in there.
"I change shapes just to hide in this place, but I'm still, I'm still an animal" -Miike Snow, 'Animal'
"Where there's life, there's hope."-Terence
Top

I wonder how much when you saw them matters. Lion King obviously has massive furry credentials, so let's exempt it from this.
The Little Mermaid, Beauty and the Beast, Pocahontas and Aladdin were all ones I saw quite young. They are good but I think I probably see them more as kid's films because I was a kid when I watched them.
Tarzan and Mulan are older films with better animation technology and feel more mature as they are newer in my experience. (In gaming I played The Lion King on DOS, Aladdin and The Little Mermaid on SNES. I played Tarzan on Windows with 3D graphics.)
Hercules I think I saw once but we never had a copy at home so I have no real memories of it. And I only saw Hunchback much, much later.
"If all mankind minus one, were of one opinion, and only one person were of the contrary opinion, mankind would be no more justified in silencing that one person, than he, if he had the power, would be justified in silencing mankind."
~John Stuart Mill~ 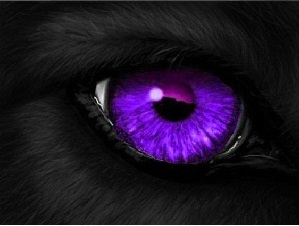 As a kid I cant even tell you how many hundreds of times I watched Cinderella, but that came out way before any of these movies.

So out of these Mulan is by far my favourite, she's just such a badass but it also shows the horror of war pretty well and I really like the other characters. For my second pick i went with Beauty and the Beast coz that's another one I watched a few too many times as a kid. and then third pick is Lion King and not just coz of the furry significance but mainly because the songs are absolute bops.

Most of the other movies on the list aren't really my cup of tea. Not into mermaids much, didn't enjoy Pocahontas, don't care much for mostly naked jungle man. Aladdin and Hercules are fun movies but not in my top 3.

and that leaves Hunchback which would probably come 4th. I love it. I love the song Hellfire. but damn does that movie make me extremely sad. Growing up being the "ugly kid" and being constantly bullied and tormented and repeatedly told that nobody would ever want me, and eventually mostly hiding away in my room with no friends except made up ones in my head. Yeah that movie hits just a little too close to home in some bits.
Steam: Kievvu
Telegram: @Kievvu
Furry Amino: Kievvu
Discord: Kievvu#1856
Blizzard: Kievvu#2944
Top
Post Reply
4 posts • Page 1 of 1

Return to “Movies and TV”