The place to talk about anything just generally furry. If you have a furry-related thread that doesn't fit anywhere else, put it here! Just keep it clean.
Post Reply
12 posts • Page 1 of 1 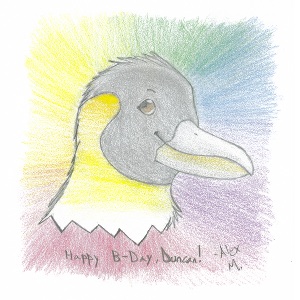 Hey everyone. As I've mentioned before, I am presently doing my masters in psychology through Unisa, and the dissertation I'm in the process of writing is on how furry fandom looks in South Africa, how being a furry helps mentally, and potential ways in which furry differs here from overseas.

So would everyone please do me a favour and fill out this survey? I think everything should be understandable. For reasons of legal consent requirements, and because some questions touch on a few adult topics, this is for 18+ participants specifically. Once processed, the results will be available in dissertation format, and I will be publishing academic articles on it (in the SA Journal of Psychology I believe), which I'm also happy to provide copies of once published.

Link is posted in the Venting/Support section, in this thread, here: viewtopic.php?f=23&t=5396

Moved it into the furry chat area as it is furry.

I'd certainly be interested in seeing the results when its done. I haven't done the survey yet but I am curious about the comparison. Are you also asking people overseas or are you just comparing with the FurScience data? If the latter, does that mean it has the same questions?
Flayrah Contributor
SoFurry Ambassador
ZAFur Administrator
Top

I answered you on Telegram (a bit badly, admittedly), but since this question might come up again, I'll answer in more depth: I'm not comparing to overseas at this point, that'd be getting ahead of myself a bit. The study being done is just what is called "exploratory" - when dealing with something new (as furry in South Africa is, nobody else has ever studied it in this country), the first step is to figure out the basic features of it. With studying groups, that means demographics usually - race, age, gender, etc. distributions. Seeing how similar or different it is to foreign populations is done later on, the primary concern with initial studies is to just get a broad idea of exactly what we're looking at.

These sorts of studies are important because they help inform further studies, showing where focus should be and helping avoiding wasting time and money chasing vague guesses that never lead anywhere. For example, we can say that, at an initial glance, certain features appear different in this population to others, and do studies later on to determine if there's what's known as "statistically significant" differences - i.e. populations might differ quite obviously on, for example, average age, but even though we can see the difference, it doesn't mean that the difference actually has an impact. Or, we could see that, for example, furries here highlight some very specific ways in which being furry helps with some issue psychological issue, or some aspect that the local population deals with that foreign ones do not, and a later study can be done that explores those in more depth, having been informed of the potential existence of such.

That said, a good few questions are based on the way FurScience asks questions, and so perhaps there are possibilities for comparison at a later date, just not within my dissertation. I'm also not sure on the ethics and all of that, I'd have to talk to people and probably get cleared for it. I do have to store the data for a number of years though, for various reasons, but at this point this is my main focus. One thing at a time.

Yeah, I posted here before the Telegram discussion. Although the South African fandom hasn't been studied in a proper academic way, there are plenty of polls about some of the same questions as your survey that have happened on the forum over the years. (That's the cool thing about forums, we can go back and use that information.)

Just wanted to give a quick update on the survey, now that it's been about 2 weeks since I started it.

Firstly, I realised I was a git and forgot to mention that this survey runs until July 4th.

Secondly, within this time I've collected 62 responses. I just wanted to say thank you to everyone who has responded to my questions. I'm also extremely happy with how people have responded. When I pitched it in 2018 in my masters application, I had no idea I'd even be accepted by anyone, and ever since I actually was, I've been pretty nervous that everyone would be angry or upset about it, once it started. So I'm really happy everyone has been nice.

As for the data itself, well... it's fascinating so far. I've been processing the answers you have about furry in SA differs, and seen some of you talk about it, and while I can't give you any specific details yet... so far, some of what you assume is pretty dead-on, some is a bit less so, and patterns are definitely starting to emerge. More data will make everything more clear, but I can certainly start seeing trends.

So, just a gentle reminder to do it if you haven't, and please do keep sharing it around.

Anyway, I'll stop rambling. Thanks again for all the cooperation and kind words and everything!
Top

Will we get specific details by the end of the year?
Flayrah Contributor
SoFurry Ambassador
ZAFur Administrator
Top

Seems unlikely at this stage.

The corona nonsense has been screwing around a lot of the admin side of this. Part of all this depends how long things take to sort out, but the roadmap is basically that the first academic article will be submitted by the end of the year (which basically will just serve as an introduction to the furry concept to a local academic audience), the details would be put into the second article following later. That'll likely only be published after the dissertation itself is complete (due to the sheer length of time publishing takes), meaning that that'd be the initial release of information. But even if I manage to do that fairly quickly and submit it soon after completion of the survey, it takes several months for a dissertation to be marked and approved (perhaps longer, depending on backlog from the virus or other admin issues), and only after that is it available to anyone else.

So I don't think it's likely, unfortunately. I mean it is possible that it'd squeak in just at the last second of the year, just not particularly likely. Admittedly it'd likely be a stretch even in normal, non-corona circumstances, but still, thanks, 2020.
Top

Well to quote one Twitter user I saw online talking about this paper: https://academic.oup.com/sysbio/article ... 10/5498714

Scientific publishing is about as broken as something can be without completely falling apart.
Flayrah Contributor
SoFurry Ambassador
ZAFur Administrator
Top

Yeah, journal publishing is notoriously hellish. Friend of mine who has published in marine biology has told me stories. I can't speak for psychology specifically, but I can't see how it'd be any better. Not looking forward to all that, never mind that I'll be doing it more than once for this work. Probably still going to be juggling that while working on my PhD. So it goes.

So, obviously, the university-archived dissertation will be the first release, as I said before. Still don't think that'll be ready before the end of the year, unless everything goes really well (and not just on my side), but it hopefully shouldn't be too long into 2021 before you can start seeing what I found out. Either way, I will throw out direct links to everything as and when they happen.
Top

So it's June 4th, which means that there's 1 month left on the original timeline I setup for my masters research data collection.

Unfortunately I can now say for sure that I won't have anything to show this year, but I don't believe I have too much yet left to do, everything's just been delayed. Obviously everyone will be informed as soon as things get published. I know some of you are definitely keen to see what's going on in the community demographically. I really hate being a tease, but it's really been interesting.

The more data I get, the more accurate this is, so please, if you haven't done it yet, do consider doing so soon. I can also extend the deadline if requested, since it's not like anything else is happening with the work presently due to the lockdown.
Top

So I'm just about ready to wrap up my data collection on South African furries, and I'm really blown away by the responses from everyone so far. What I can see so far has been fascinating, and I think a lot of you will be very interested in what the fandom looks like in this country. Looking forward to finally processing it and finding out even more.

Anyway, just in case anyone forgot about it or didn't know, I'm doing a LAST CALL for responses. The survey was supposed to wrap up on the 4th of July, but circumstances have caused delays with admin stuff on my side, and so this is going to keep going on for a few weeks yet, until the admin sorts out (I'll give everyone forewarning of a few days before closing though).
Top